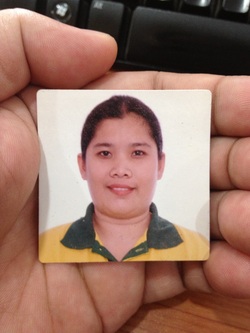 I'm so amazed when I decided to write this day my testimony of how I become a writer in this page, you know why? because my birthday is coincidentally matches today's date and year by a number 13. I was born on September 13, 1979 as certified by the office of Mayor in Plaridel, Misamis Occidental, Mindanao, Philippines. But my mother opposes and says it was a mistake and a late record made for I was actually delivered in day eight(8) the day in which the virgin Mary was also born according to the tradition. Anyway, whichever the day is I'm very thankful I came out in human flesh and not in the beast. There is a saying; A good tree bears a good fruits, and it really means that if my father is a drunkard then his son soon will be. I believe I was like to my father being a joker, drunkard, smoker, fornicator, and lazy, but in the other side we are also friendly, resourceful, and wise. For a short time of spending life with him, he died few days after my Elementary School graduation at my age of twelve(12). Then my mother took all the responsibilities and nurture me until I can stand by my own with the moral and financial support of my five elders and cousins, I thank you all for that from the bottom of my heart and I can never forget those days.

As the years go by, despite of everything that goes good and bad, I became matured and was married with Miss Jonnette Maliao Castillon in San Lorenzo Parish Church of Hinaplanon, Iligan CIty, in May 18, 2005. Here my journey of being a husband and a provider has started; doing things which may please my wife and give comfort in the house. At this time I separated from my mother and she live alone there up to this day. She is a good mother and not ambitious, contented in all her ways even in being alone. Sometimes I'm thinking about her as a good pattern I use to be who are living in simple and silent place but maybe it's not time yet. To be honest, since the day I married everything has changed in me and begun exploring things beyond I could imagine. I did not expect to see who I am now but not so bad and I have learned many things both in God and men. And I realized that the Bible is right in saying;

I know some of you will not believe but I have changed progressively. I believe the spirit that dwell in me is the one who manipulate my new senses to become a diligent worker in His kingdom, the spiritual world of man. And through it I can see all things I had experienced that they were working together for good. Many would say in following Jesus steps our life would be miserable and full of burdens and sufferings. Well, if you are in my place now you would say it's not gonna happen. Actually, Jesus life in sacrificing was intended only to them who are his apostles as he called them and said; "follow me" Matt 4:19. All of them had suffered materially, physically, emotionally and died as martyr thereafter. But for us who live after them will not experience as they did unless you will do it intentionally. One of the apostles said about this type of commission that they were appointed to fulfill Jesus words to follow him until death but us are preserved in peace.
Our life today is just the fruit of their sacrifices and accomplishments and at the same time we are the purpose of Christ's death on the cross; that we may live a peaceful and eternal life. Therefore, in understanding Bible story is a good start of handling human responsibilities. As a family man, to provide and to care the house is my duty here on earth as long as I live, and I am so happy to know that me and my wife have the same foundation of belief which is Christ and serve God in goodness of our heart; like she is a cheerful giver and I am a good provider. We both know all of this and are happy doing this way because the Bible says;

If you can see what the picture above means, that is all about love and care and nothing else. And this I pray to God that he may give us a long life on this earth to live and to continue discovering things he made.