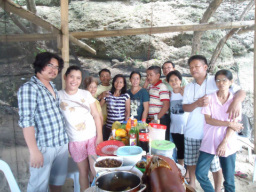 Here I would like to clear some doubts in handling "own interpretation".

I'm very thankful that I had made a conversation yesterday with my brother and together with him also my mother, sister, and wife inside our house. It started when he talked about treasure hunting; supposing if his expedition team will succeed in their trip someday, he could give even millions of pesos cash to our mother for the sake of love..... So, I quoted few passages to show him of what the Bible say about giving of gifts as this;

Paul said that they should give this way so that there must be an equality of wants in every season and that by this their love will abound to each other.

The point here is, in giving gifts it is not limited to the richness and emptiness we have but to the willingness of the heart, because it is not mean for you to be burdened upon giving gifts while the recipient is comforted. It should be that both parties will experience the power of love being generated through charity.

At this point my brother agreed and accepted that he should not wait the millions to come but in anytime he can share, help, and give gifts to our widow mother according to what he has and not according to what is to come. But when we discuss the other topic concerning Christ' law of adultery it seems we have disagreement in this matter which says;

Firstly, we have agreed that by just looking in the eyes man can commit adultery base from this new law of Christ. But when Christ said; "And if thy right eye offend thee, pluck it out, and cast it from thee", my brother initially says; that eye was exactly a physical eye which people should pluck if it can sin. So I disagree and says if that is a literal eye then Christians must all become physically blind from the moment Jesus has spoken because flesh will always have sin;

So I quoted another verse to interpret the meaning of what would be the type of eye must be taken off, to enlighten the mind of my brother. And they read this;

From here I explain to him that the type of eye that must be removed from man is the LUST of the eyes. It is not intends literally to cut off the eye neither kill ourselves if we have lust. But it is the lust that should be cut off from our mind as we tried to compare it in 1 John 2:6 verse basing from the guidance given by Paul as written;;

Since we have only limited time of sharing through internet, I decided to write it down in my website to clearly deliver the words  and to enlighten everyone's mind including the listener which were with him at that time. So now I'm going to tell him and to all who read this article that all written words in the Bible are spiritual because they are God's breath purified seven times. Though it contains natural things, they are parts of God's revelation to man to manifest the light from darkness or to reveal the truth from lie. And all of them are heavenly writings.

When Paul said; "comparing spiritual things with spiritual", it pertains to the comparing of God's words with its words alone in order to get a better understanding of terms which came from the holy Ghost and not from men. But if we interpret terms directly into our own understanding without any scriptural proof use to defines its meaning, it means it is your wisdom alone who compares spiritual things. For example; when Jesus said; cut off your hand if it can do sin, now if we directly interpret it into our own literal imagination surely it is our fleshly hand that should be plucked out from the body. And this is how a man interprets by his own understanding of terms. Whereas by the use of scripture in defining its spiritual meaning, we can say that the "hand" here is not a fleshly hand but the evil hand. It is because we have both good and evil hand beside the flesh, and the good one is called "the holy hand" as this verse says;

Paul said also in that passage that when we pray we will lift up our holy hands to God. Again, it's not a natural hands but a holy hands which is the hands of your spirit. Because all flesh including our natural hands are corruptible and subject to death whereas our spiritual body is life and holy.

In truth, the Bible has two sets of truth and it's either naturally delivered or prophetically. Like the rock in the wilderness that flows with water, naturally it was a visible and earthly rock in front of Moses but spiritually or prophetically it was also Christ.
The same concept if we compare this to the term "hands". When Christ said; cut off your hand, and when saint Paul also said; lift up your holy hands, it's not about the biological hands but it's about the evil desire of flesh and the good desire of the spirit. Actually, when we discuss something biblical it means we are already talking spiritual things. But if we discuss something outside from the scriptures like movies, world history, news update, showbiz, and etc that deal with worldly wisdom, and that's therefore not spiritual.

I hope you understand of what a spiritual thing is.

In addition, when you define a prophetic terms literally or figuratively without any biblical proof or verse, and that's exactly a private interpretation and it will lead you to foolishness.