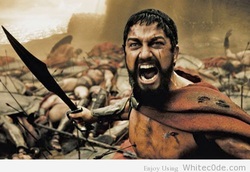 In English Dictionary;
Anger is a strong feeling of grievance and displeasure. It is an emotion related to one's psychological interpretation of having been offended, wronged, or denied and a tendency to react through retaliation.

Some Psychics also explained;
The vast majority of chains of angry behavior never proceed past the first link. For example, someone in the family will tease or insult another and then stop. Since no one reacts aggressively to the provocation, it lasts only a few seconds. Three- or four-step sequences last less than half a minute and occur even in “normal” families. But when aversive chains last longer than half a minute, yelling, threatening, or hitting may occur. Sequences like these are frequently observed in dysfunctional families. The longer the chain lasts, the more likely it is that violence will occur.

And in my own study;
Anger is an instinct of all living things specially humans who are more subtil among the beasts in the field. I think it is made to attract any type of communications in proportion to stability. Basically, if a man cannot react to a certain situation it means he is an innocent, weak, ignorant, and easy to kill. Whereas an active man has the ability to judge, punish, insult, criticize, and etc. that can offend the opponent who triggers anger. But in the sense of reacting without a cause is an abnormal deeds not only physically but also spiritually.
A person who behave in that way without any triggers to be angry is necessary of mental assistance and considered to be wild. And those who did with any reasons, must learn the fact that God has said;

Yes, God says we need to control our anger by letting it pass in a short period of time and not eternally. And if possible be cooled after the reaction took place to keep all things in order. For example; if you are angry and still you are burning inside or offended then you must know this principle of keeping the faith; "let not the sun go down upon your wrath". We know that triggers are those dishonest words, dishonor, disrespect, disbelieving, and etc that hurts...but I tell you we have reacted because we are matured already in dealing circumstances, except if  mentally disabled.

Sometimes, anger causes death, destruction, and war to each one of us due to ignorance and if both parties are ungodly creatures. But for us who really uphold the truth, it can only last for a short time by letting not the sun go down upon the wrath. As it was observed by many Psychics; that those who refuse to overcome anger within time limit, they called them "dysfunctional families".


Therefore, understanding the details of life can help us conquer foolishness and can educate the ignorant as well. So nobody can hide a feeling but it can be controlled thereupon.