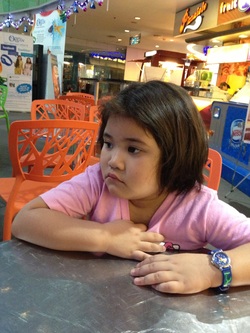 Is a child sinless?

Since child is an innocent creature at their age, they are not able to understand the concept of sin. When Jesus was on earth, He considered them as the type of creature that exist in the kingdom of heaven. Certainly, they are distinct among men.

Touching the creation, in the book of Genesis the writer says that Adam was an innocent man in the day he was created. He knew nothing about good and evil deeds and ignorant of worldly desires. In other words, he has not yet come into the knowledge of sin.
Probably, Adam is the type of heavenly creature who was living in paradise like a child in the kingdom of God, and when he knew something about lust he became man of sin that could possibly be the future of a certain child as well. Based from the words of Jesus and the principle of life as shown in the creation, no one can judge hereby that a child has the knowledge of sin that causes them to die spiritually.

Concerning the belief of some scholars that claim; no human creation has escaped the curse of sin since the fall of Adam, wherefore man and child are both sinners and come short of the glory of God according to them.


The truth is in that passage of Romans written by Paul, the context of curse is not pointing to the natural body of flesh of men wherein the death occurred but it was about the knowledge of sin that they can inherit from Adam. Anywhere in the scriptures sin is always be the knowledge of good and evil and it is not a biological cell of disease. We should bear in mind that the Bible is spiritual and came not from the wisdom of men but from the Holy Ghost. Thus we can't just directly interpret them scientifically but in spiritual sense.
Secondly, the phrase "for that all have sinned" is referring to the living and dead Jews who disobeyed the law. In fact there are some that found sinless in the law though they died and will die physically.
Thus, we need to be care in reading physical and spiritual death because mostly, people believe a biological death is the product of curse. You can never find any verse in the Bible that support this belief, there is none even one. Beginning from the Genesis down to Jesus statement in the gospel of Matthew and even to Paul's writing, the curse is always spiritual and not natural. And it only matters if we talk about knowledge wherein a child is ignorant in this area like believing Jesus Christ as the Son of God....This truth has nothing to do with the child and is illogical if we try to force the inexcusable concept of faith to them for they cannot even recognize the creation as Paul said;

If you are going to analyze the behavior of innocent child, you will see nothing that the world has in them like the lust in the eye, lust of the flesh, and the pride of life. Those are the knowledge of sin that only a matured man can bear to think and this is exactly the Bible is telling about. And take note; it could only appears to man if someone will introduce him like the serpent in the garden of Eden. Notice there when the serpent beguiled Eve, the very moment that we can use as a proof of the called age of accountability is when Eve decided to accept the offer for certain reasons;

As being interpreted by the apostle John that those are actually the knowledge of sin in this world;

The same with Eve a child has its own maturity point to be able to understand good and evil. And when that day comes, the spiritual death then occur; as by one man sin entered into the world, and death by sin; and so death passed upon all men. And became one of them knowing good and evil.
But thanks to our Lord Jesus Christ who abolished this kind of death through the gospel.


Therefore, the cycle of life is patterned to Adam in the first place but it can also be regenerated through Christ. As a child came into this world without sin but because of deceitful men/serpents that already exist it becomes sinner.

The bottom line: A child is a perfect image of heavenly creature; sinless and has no reputation in this world, unless if being deceived. That is why the Proverbs says;


And according to the election of God, the Children are elected not of works but of God himself.