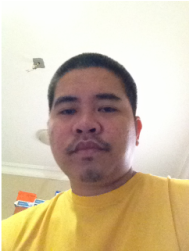 There was a time in my High School days that our teachers Principal Sis. Ma. Estrella also known as Sister "Star" had taught us a lesson. Though I met her not oftentimes, I do admire her character of being judgmental, frank, and very strict during that days especially in coming late to the flag ceremony. As I can recall, I was one of the late comers who also did write the words " I will not come late again" repeatedly in every lines of a whole yellow pad paper contained a hundred leaves. I almost forgot her full name but never to the lesson she shared one time about how a person would judge a certain thing.

While Sister Star was talking in front of us in the class room, she did erase all the writings on the blackboards and said; "guys, what can you see if I write a piece of dot in here? "......As we see nothing that written besides a dot of chalk, I tried thinking of what would be that means because it seems riddle to me. Since I couldn't guess another meaning to it, I just relied my classmates answer as they saw only a small dot or period on the board and nothing else. And Sister Star smiled and said; well, I have expected your answer as you can see only a dot but I tell you that is how most people are usually do in judging a certain thing. The same with you they used only to consider a small part of man's imperfection to conclude his whole stand. Then she emphasized; A blackboard represents the whole life of a certain man, and a small dot is his deed which is evil in the sight of others. It means, you people can only see the reasons which can ruin the others lives.

Yes, Ma. Estrella was absolutely right. That type of judgment/comment she mentioned is a common thinking of men. They would directly conclude the issue of individuals patterned to the concept of the leaven bread which the Bible says; "a little leaven leavened the whole lump".


Analyzing the parable of the leaven, it's a little part of belief that can damage or corrupt a whole stand of man. The leaven is just a small piece of ingredients but is enough to enlarge a whole piece of bread by filling with bubbles and make voids in it. Jesus was using this reaction as his parable of the leaven bread to be aware of corrupt teaching of the Pharisee and Sadducee (the Israel priests).

Jesus meant that when you accept the teaching of the Pharisee and Sadducee, you will be corrupted as a little leaven leavened the whole lump because it will make voids in the teaching of Jesus.

That is why in fulfilling the law of Moses, Christ call it "the leaven" because it mix up the law of Christ. Thus, if you are still:

Then Christ becomes nothing at all.......

Similar to this, man also will never consider the goodness of others if he can see something that seems evil for him.  In other words, all the goodness of others he previously saw will be covered or disregarded by that reason. Perhaps in humanity, the law of work is so sensitive and it is a leavening in the face of men. But we have now the law of faith that need not to be justified by the law of Moses like the unleavened bread.

So beware of the Pharisee's teaching and try to have a pure stand.